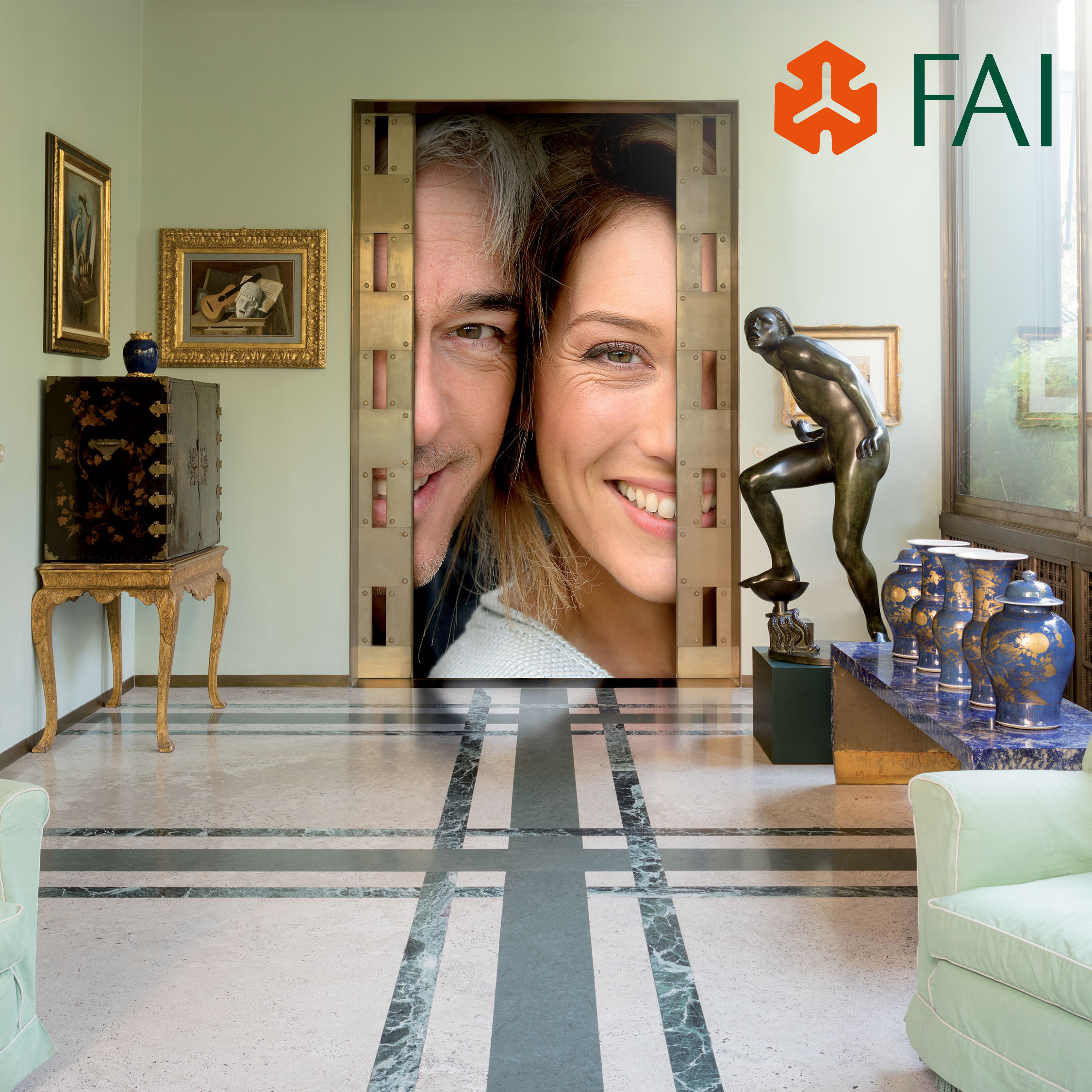 The biggest street festival dedicated to Italy’s cultural heritage and landscape is back. 600 openings in more than 300 cities throughout Italy, in full compliance with health-and-safety regulations.

Historic villas and parks, royal residences and gardens, castles and monuments that reveal surprising spaces, archaeological sites and unusual museums, as well as botanical gardens, nature trails that can also be enjoyed by bicycle, and itineraries in villages that preserve ancient traditions. Once again this year, the 600 openings in more than 300 cities will take place during FAI Spring Days on Saturday and Sunday, 15-16 May (government regulations permitting), in full compliance with health-and-safety regulations.  Once again this year, the Spring Days will tell the story of the exceptional variety of Italy’s cultural heritage and landscape.

Again, this year, FAI (the National Trust for Italy) will stage its flagship event, which is always greeted with joy and hope and which has now become a must for many Italians who love to be amazed by the often little-known beauty that surrounds them.  Once again, the Spring Days will offer a valuable opportunity to explain, through the careful choice of locations along with explanatory narrative, the Trust’s new cultural vision – presented in March on the occasion of the 25th National Convention of Delegates and Volunteers – that sees the Environment as the indissoluble interweaving of Nature,  History and Culture as the synthesis of the human and natural sciences. And Italy, like no other country in the world, is rich in examples of how the harmonious co-evolution of Nature and Man has created unique landscapes.

The FAI Spring Days, in addition to being an opportunity for the Trust to meet the public, are also an important fundraising event: taking part in them will allow you to support FAI’s mission at a particularly uncertain time. To do so, the public can make a free donation – of a minimum value of €3 – and also sign up for annual membership, either online or during the event. The online donation will allow you to book your visit, to ensure your entry to the open sites where places will be limited because of continuing health restrictions.

Some visits are exclusive for FAI members. Do use your FAI UK membership to visit these places!

Among the most beautiful openings of the FAI Spring Days 2021:

* Rome: usually inaccessible, Villa Il Vascello, designed in the 17th century by Plautilla Bricci on Bernini’s instructions and since 1985 the seat of the Grande Oriente d’Italia, the oldest Masonic institution in the country. In the Agro Tiburtino Prenestino area, visitors will also be able to see Ponte Lupo, the most impressive section of the Aqua Marcia, the longest aqueduct in ancient Rome, built by Quinto Marcio Re between 144 and 140 B.C. and in operation for ten centuries.

The newly restored Apartments of Carlo Felice di Savoia in Palazzo Chiablese, next to the Royal Palace, renovated by Benedetto Alfieri in the second half of the 18th century and richly decorated and furnished by leading painters, plasterers and cabinetmakers working at court, will be on show for the first time. Another place linked to the Savoy family will also open, the Parco del Castello di Aglié, one of the sets of the TV series Elisa di Rivombrosa, 35 hectares in area and normally excluded from the tour, able to be discovered on foot or by bicycle along three routes of different lengths.

Bologna: the seat of the Prefecture since 1927, the sumptuous Palazzo Caprara, commissioned by the Bolognese notary Francesco Ercole Caprara in the second half of the 16th century, whose rooms include the Chamber of Napoleon, who stayed there, and the Room of the Queen, Josephine de Leuchtenberg, later Queen of Sweden.

Matera: Palazzo Malvinni Malvezzi, overlooking the Sassi in a dominant position compared to the city’s other aristocratic residences, testifies to upper-class life in Matera and is an example of a mixture of styles, from baroque to neoclassical.

Members of the Trust, and those who join as FAI members during the event, will be able to enjoy priority access to certain sites. Among the openings reserved for members:

Lucca: Martinelli Luce, a company founded in 1950, will open its gallery that displays its lamps, lighting systems and prototypes; these are exemplars of Lucchese excellence that is internationally recognised in the field of design and present in the collections of the world’s major modern art museums.

Monza: in the area of the courtyard of honour of Villa Reale, the Serrone, the Rotonda and the citrus greenhouses, where nurseryman Davide Chiaravalli and cytologist Diego Pessina will illustrate numerous old varieties of citrus fruits and the practice of grafting.

Bologna: the Grand Hotel Majestic (ex Baglioni), built in the 18th century as the archbishop’s seminary, sold by the Curia and transformed into a sumptuous hotel in the early 20th century. Prominent figures such as Nicolas Romanov, Lady Diana and Federico Fellini have stayed here.  In the lower level, the remains of one of the city’s minor Roman streets are exposed to view.

From the north to the south of the Italian peninsula, great attention will be paid to nature trails and open-air itineraries to reveal many small villages. These include Offida (AP), in the Piceno hills, where you can visit Santa Maria della Rocca, one of the most significant Romanesque churches in the Marche region, which is often closed, built on a cliff above the remains of a Lombard complex, and Gessopalena (CH), situated on a spur of chalk, the mineral from which the village takes its name, progressively abandoned following the Maiella earthquake of 1933 and the Second World War and left uninhabited for over 50 years. In the province of Reggio Calabria, the focus will be the “del Brigante” (bandit) path, with a succession of place-names recalling stories of rebels and brigands, which ends in medieval Stilo, famous for its church.

There will also be a number of curious visits. These include the Miseno Theatre in Bacoli (NA), a Roman building built between the 2nd and 3rd centuries AD and the 17th-century Villa Volpara, known as Il Fodo, in the hinterland of Lerici (SP), now completely ruined and accessible by a simple trek through the woods, which, during the Second World War, became a refuge for partisans and housed a clandestine printing house; the neoclassical Villalago at Piediluco, a hamlet of Terni, which can be admired for the first time after being closed for almost fifty years, built at  the end of the 19th century at the behest of Baron Eugenio Franchetti and surrounded by a 35-hectare park with stables, a caretaker’s house and an open-air theatre; the Brussa in Caorle (VE), in the Vallevecchia Nature Reserve, characterised by more than four kilometres of sandy coastline and an agrarian hinterland reclaimed from brackish lagoon areas and home to rare species of orchids, frogs and tortoises; Fort Sant’Andrea and the 19th-century Fort Carlo Felice, with the Navy’s cadet schools, on the island of La Maddalena (SS); the small Fal’Fil Museum in Ranzanico (BG), dedicated to silkworm breeding, where historical looms and a collection of silkworms from all over the world are on display; Salinella Metaponto Lake in Bernalda (MT), a site of community interest that extends into a wetland area behind the dunes and an ideal habitat for storks; San Giovanni Park in Trieste, a former avant-garde asylum district and now an open, multifunctional garden; the Fonderie Granducali complex in Follonica (GR), commissioned by Leopold II to process minerals extracted from the island of Elba and now upgraded, which houses the Maremma Museum of Cast Iron Art; finally, in Santa Maria del Cedro (CS), the Laos Archaeological Park, with the remains of the important Achaean polis colony of Sibari, and the Cedar Museum, which tells the story of citron, the typical local fruit, full of literary quotations and references to Jewish traditions: every year, in fact, hundreds of rabbis come to Calabria in search of the perfect citrons of the ‘smooth diamond’ variety, to be used for the celebration of Sukkoth.

From 6 May, see the full list of open properties and how to participate at www.giornatefai.it

The 2021 edition of the event is made possible thanks to essential contributions from major enlightened companies. Ferrarelle, FAI’s official water and partner in institutional events, has been a valuable supporter of the initiative for ten years, with its Parco Sorgenti di Riardo (CE) on the list of places that can be visited; together with the Trust it is engaged in important activities to raise awareness of the proper recycling of plastic material.

FinecoBank, one of the most important FinTech banks in Europe and one of the main consultancy networks in Italy, is the prestigious Main Sponsor of the event because it has always been committed to enhancing the artistic and cultural heritage of the country.

The FAI Spring Days take place under the patronage of the Italian Ministry of Culture and of all the Italian Regions and Autonomous Provinces. We would like to thank the European Commission, which has been a partner of the FAI Spring Days for a number of years through its Representation Office in Italy, for its collaboration.

Many thanks to the 129 Local FAI Branches, the 102 FAI Groups, the 97 FAI Youth Groups and the seven FAI Bridging Cultures Groups that are active throughout Italy. Working alongside the volunteers will be the Apprentice Tour Guides, students who wish to carry out an in-the-field experience with their teachers as part of a skills-training course or who have independently chosen to get involved to tell the story of the wonders of their local areas, even if only for one day.

Special thanks for their generous support in ensuring the success of the event go to the Protezione Civile, with whom we are celebrating 15 years of close cooperation this year and who will stage an exceptional opening of their operational headquarters in Rome’s Via Vitorchiano, 4, for the occasion.  Special thanks go also to the Carabinieri for their contribution to the security of the event. Heartfelt thanks also go to the volunteers of the Italian Red Cross, who are working alongside FAI for the second time to provide valuable support in this particular period of health emergency.

Finally, we would like to give a special thanks to the owners of the hundreds of places opened in addition to our own FAI properties and to the municipalities who welcomed this initiative, understanding its significance as a new start.