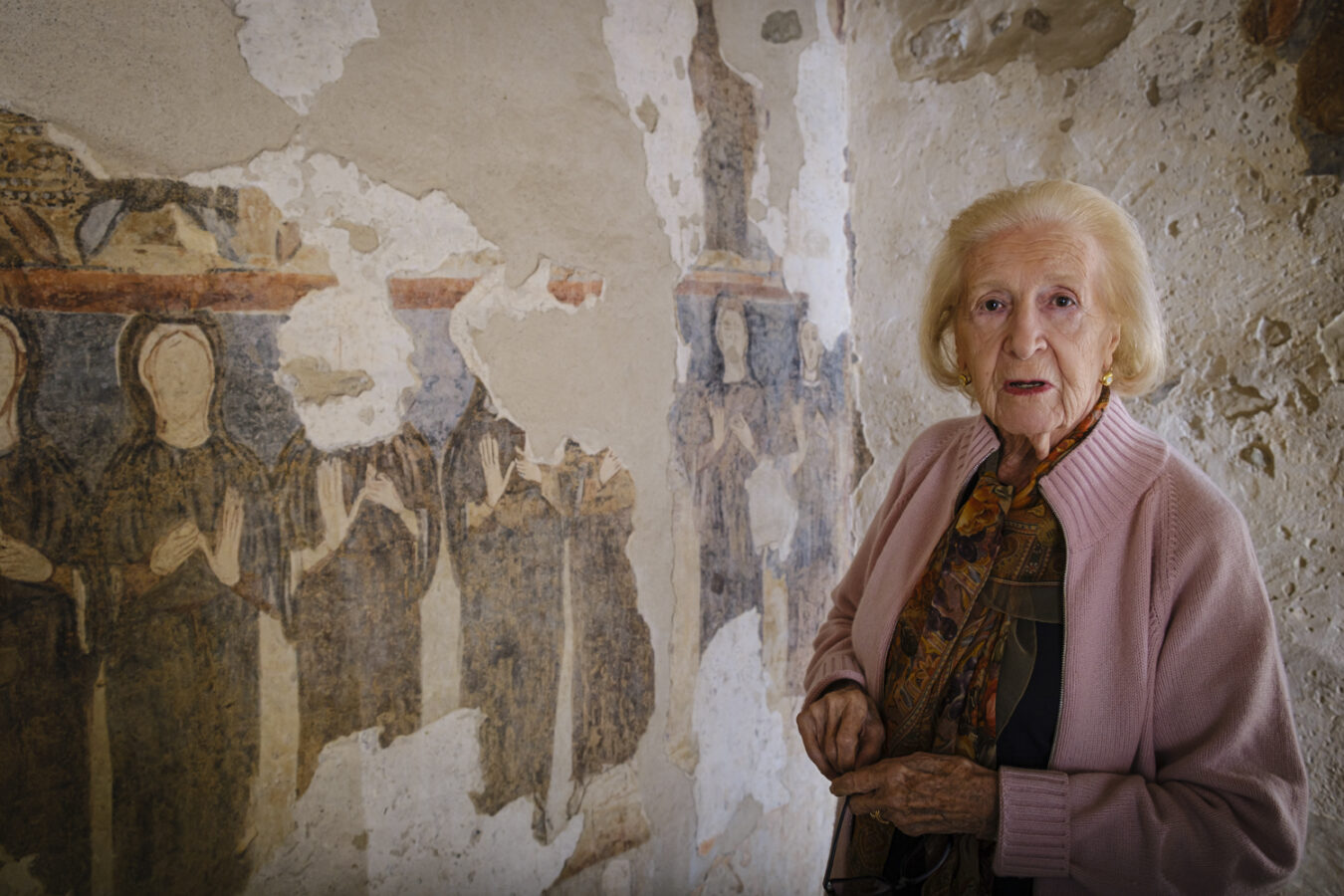 In memory of Pinin Brambilla, Italy’s most well-known restorer

Known for having worked on Da Vinci’s Last Supper and the Scrovegni Chapel, the 95-year-old restorer had recently come back to FAI’s Monastero di Torba.  She left us at the age of 95 last December.

In memory of Pinin Brambilla, we present an article that was published last year following the interview with Marco Magnifico, FAI’s Executive Vice President.

At 95 years old, Pinin Brambilla Barcilon is back among the frescoes of the Torba Monastery. A lesson in class; even in the midst of a restoration site she is always “smiling, well combed, with beautiful earrings, in a word: perfect.”
Executive Vice President Marco Magnifico dedicates words and a diva’s welcome to her, as she is. We are talking about the lady who between 1978 and 1999 carried out the restoration of Leonardo Da Vinci’s Last Supper, the most important restoration ever. And then Giotto’s paintings in the Scrovegni Chapel in Padua, Masolino da Panicale’s frescoes in the Baptistery of Castiglione Olona, the list is endless. Not only practice but also theory. Now she’s back at the Monastery of Torba, like when you return to your first love. There, where it all began, also for FAI. Open to the public since 1986, it was one of the first properties of the Foundation: it was in 1977 when Giulia Maria Crespi, at the insistence of Franco Russoli, bought the monastic complex (immersed in the archaeological park of Castelseprio, today, together with the Tower of Torba, a UNESCO World Heritage Site) to donate it to FAI. The Tower was at the mercy of neglect and bad weather: on the walls, under the white plaster, shreds of frescoes surfaced, the faces of some nuns. The wise hands of Pinin Brambilla, called to Torba in 1978 by Carlo Bertelli, set to work bringing to light and restoring, under the watchful eye of Renato Bazzoni, the frescoes of the Lombard era, still preserved under the plaster.

In the following years, FAI committed to the care of the wall paintings, entrusting the studio of Pinin Brambilla with the maintenance and restoration campaigns, such as the one in 2007 and today. A new intervention was necessary due to the precarious state of conservation of some portions of the fresco and the loss of tone and strength in the colours and strokes. And Pinin is there again, directing the worksite on the frescoes of the Tower, taking care of the nuns saved forty years ago: she is at work with her team, consolidating, securing, integrating with watercolour retouches and glazing, restoring legibility and plasticity to the drapery of the veil under Christ. They work elbow to elbow; for her it had not always been so.

WATCH THE VIDEO OF THE INTERVIEW TO PININ BRAMBILLA BY MARCO MAGNIFICO, FAI Executive Vice President (in Italian)