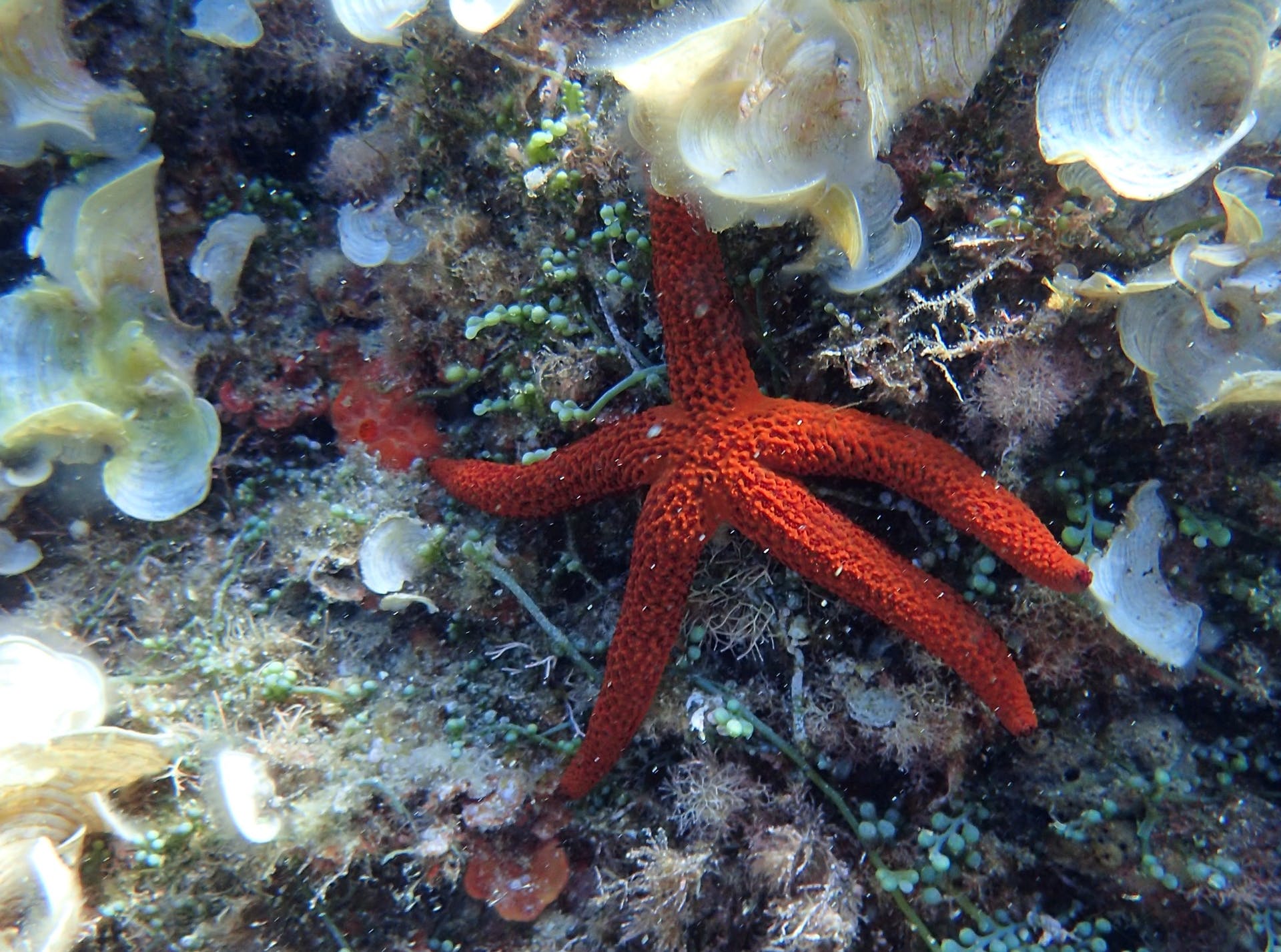 A great sea of biodiversity at the Bay of Ieranto

Every year, the Punta Campanella Marine Protected Area monitors the marine biodiversity of the Bay of Ieranto and, to date, has recorded more than 260 species: wonders hidden from the surface but fundamental to the balance of the Bay’s ecosystem on the Tyrrhenian coast.

The Mediterranean Sea is a global treasure trove of biodiversity. Its highly diverse ecosystems host up to about 18% of the world’s marine macroscopic biodiversity with over 17,000 species.

In Italy there are many coastal and marine protected areas that prevent anchoring and access to motor boats to protect the seabed and avoid water pollution.

The Punta Campanella Marine Protected Area, established in 1997, is located on the Tyrrhenian coast between the provinces of Naples and Salerno. Covering an area of over 1,500 hectares, the reserve protects about 40 km of coastline and the surrounding sea area is the extreme offshoot of the Sorrento peninsula. Punta Campanella is separated from the Bocca Piccola of the island of Capri, and is overlooked by Monte San Costanzo, 497 metres high, which is part of the Monti Lattari chain. To the east is the Baia diIeranto, a property donated to FAI in 1987 by Italisider to save it from the dangers of speculation.

Since 2015, the Area Marina Protetta Punta Campanella has been monitoring the marine biodiversity of the Baia di Ieranto every year and, to date, has recorded more than 260 species: wonders hidden from the surface but fundamental to the balance of the FAI’s ecosystem.

To explain this intense and valuable work of study and protection, we interviewed Domenico Sgambati, marine biologist and oceanographer.

1) Marine biodiversity is below the surface of the water, unseen, but crucial to the balance of ecosystems. What are the actions to protect this colourful, rich and living aquatic world?

Nature conservation is a relatively new science, having emerged just over 100 years ago for the protection of terrestrial environments, and about 50 years ago for the marine sector. The application of this science is even more recent, so there is no certain information about it. What is certain is that natural environments where humans do not have access and do not carry out impactful activities (such as the large natural parks in Africa or North America) have a high level of health. On the other hand, the experience of Lockdown 2020 also showed us a new face of the world we consider ours: the cities, roads, ports, and areas we frequent daily, were populated with wild animals, demonstrating that our presence disturbs and reduces their geographical range. In the light of this experience, one could say that one of the actions to be taken to protect biodiversity would be to reduce our range to allow nature to catch up, which is done in Nature Parks. A famous US ecologist, Edward Wilson, in his book “Half the Earth” proposes a radical solution, proportional to the seriousness of the problem we face: allocate half the planet to us and half to an immense and inviolable nature reserve for millions of animal and plant species. Personally, I do not agree with this proposal: I believe that man must learn to interact correctly with nature and its resources. Moreover, each of us should do our part to produce less waste, consume fewer resources and generate less pollution.

2) What does the work of mapping the marine biodiversity of the Bay of Ieranto consist of? What tools did you use underwater?

In the Bay of Ieranto, since the beginning of the activities in 2011, an environment rich in different shapes and colours, i.e. species, microhabitats, small cavities, deep canyons and green seabeds, has appeared before our eyes (or rather our masks). Starting in 2015, we began a slow and continuous work of species census, through a series of study campaigns aimed at getting to know the different taxonomic groups of the Bay: algae, fish, madrepores, sponges, molluscs, crustaceans. This information was supplemented by interviews with fishermen, in order to “capture” data on species that are difficult for us to observe (such as pelagic fish: tuna, mackerel, albacore). Finally, with the advent of smartphones and the ability to quickly take photos and videos, we started to receive contributions from visitors, the so-called “citizen science”, which allowed us to record the (very rare) presence of sea turtles, as well as the sighting of a large tuna in a few meters of water. Our team of underwater operators is made up of volunteers from the MARE project, coordinated by the specialised operators of the Punta Campanella MPA, and the data collected was “validated” by experts in the field, especially in the recognition of uncommon species. The working tools: cameras, blackboards with pencils, books for species recognition, and above all the web and marine biology and taxonomy forums.

3) Which species are most at risk and should be protected?

Posidonia oceanica, Pinna nobilis, groupers and corvina, and cave environments in general are very delicate and easily accessible to swimmers. A particularly protected species is Posidonia oceanica, an aquatic plant that is endemic to the Mediterranean Sea, and which is in decline (with peaks of 35%) due to pollution and the modification of coastlines. This plant is also present in the Bay of Ieranto, with a more or less extensive prairie of patches. It seems that in the past the intense anchoring activity carried out in the Bay of Ieranto (up to 200 boats anchored every day) has damaged the prairie: the anchors undermine the rhizomes of Posidonia and plough up the seabed. Its preservation is ensured by the WAP’s protection measures (prohibition of navigation and anchoring) and by the activities implemented during the summer with the project “La Baia in Fondo al Sentiero”, and the results can be seen: some photographic surveys have shown numerous patches of Posidonia in an expansion phase, i.e. with the rhizomes tending to colonise the surrounding sandy areas. As for the Pinnanobilis, unfortunately there has been a particularly serious phenomenon of death, in line with what is happening all over the Mediterranean Sea: dozens of shells of this species with the shells spread apart and lying on the seabed, i.e. dead. The cause of the death is a mix of pathogens, probably due to environmental conditions that make the fins unable to react. Unfortunately, the origin of this phenomenon is not yet known, and researchers from various Mediterranean countries are trying to set up an international conservation plan to save this symbolic species of our sea, which is currently on the brink of extinction. With regard to groupers and croakers, the presence of our team has greatly slowed down the illegal fishing by spearfishers. However, the population of these fish still consists of small, young fish. Here we invite more and more bathers to visit the underwater caves without disturbing the fauna or damaging the walls with their fins.

4) What are the effects of global warming on marine biodiversity in the Bay of Ieranto?

In the course of our summer activities we have also taken water temperature readings for quite a long time and over several years, but we have not recorded any significant anomalies in the average values. It must be said that the body of water in the Bay of Ieranto is particularly dynamic, in constant movement, and in contact with deep water: about 1 mile away from the Bay there are seabeds with depths of around 1000 metres, from which the famous upwelling currents rise, bringing clean, fresh water into the Bay, and this influences the temperature values, even at the surface. Generally speaking, we can say that the Bay of Ieranto is in a good state of health. We will soon begin a process of evaluating the data collected, thanks to the use of biodiversity parameters and indices that will allow us to have more information on this subject. In any case, there are no mass mortalities (except for Pinna nobilis), the same ones that in other areas of the Mediterranean have affected some target species (such as: cushion madrepores, orange madrepores, calcareous sponges, etc.). In short, we have a series of positive information on the state of the environment that makes us think well.

5) What does the collaboration with FAI and the Campanella Marine Park consist of?

The collaboration project between FAI and the Area Marina Protetta Punta Campanella (AMP) was launched in 2011, and goes by the name of “La Baia in fondo al Sentiero” (literally the Bay at the end of the path). The main objective is to promote the protection and compatible use of this unique terrestrial and marine environment. The two bodies complement each other very well: FAI takes care of the work on land and the AMP oversees the marine sector. The results are obvious: every year about 100 days of activities are carried out to protect the natural environment, thanks to the support of dozens of volunteers, both local and foreign, who have enjoyed the Bay and supported conservation activities over the years. At the same time, the project includes a series of proposals for exploring the Bay, to provide an alternative to the restrictions of the Marine Park: motor boats are not allowed in, so tourists are offered the chance to visit the Bay in a kayak, or with a mask and fins, with the support of specialised guides.

Lastly, this work of presidium and monitoring has also made it possible to collect interesting data on the presence of land and sea in the Bay. To conclude: the Baia di Ieranto offers hospitality to animal and plant associations of particular value, and the partnership project between FAI and the AMP is of fundamental importance to preserve these environments, but also to make them accessible and known to visitors who are looking for an experience in contact with nature.

Domenico Sgambati, born in 1978, has a degree in Environmental Sciences with a focus on Oceanography from Parthenope University and since 2003 has worked with the Punta Campanella Marine Protected Area as coordinator of the M.A.R.E. project, the “La Baia in Fondo al Sentiero” project and the sea turtle protection programme. Since 2016 he has been teaching the course “Introduction to Marine Biology with Lab” at the Sant’Anna Institute in Sorrento, in collaboration with Jacksonville University in Florida. He is a Scientific Diving Operator and a Park Guide and Aigae Guide.