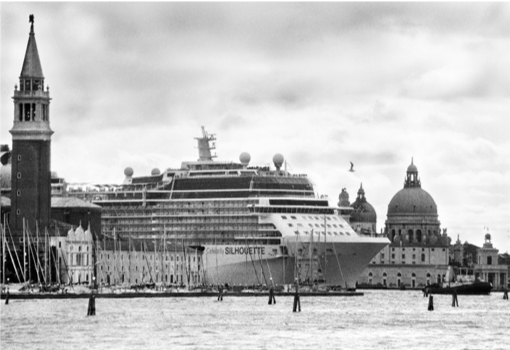 Andrea Carandini: FAI is calling for the transit of boats over forty thousand tonnes to be prohibited with immediate effect

In 2015, FAI organised a photography exhibition by Gianni Berengo Gardin in the Olivetti Showroom called ‘Monsters in Venice’, a condemnation through images of the violence that the lagoon endures every day. Today, four years on, we want to stigmatise and fight this menace: our cry for help is louder than ever.

After the recent accidents in the Giudecca Canal, Venice has been at the centre of international criticism and debate. The accidents clearly demonstrated the enormous risk faced by the lagoon on a daily basis, threatened by gigantic ships that loom over the fragile city and exposed to a dramatic domino effect of repercussions that damage its invaluable artistic and cultural heritage.

In response to this risk, many projects have emerged that aim to divert the passage of the ships away from the Giudecca Canal. All of these projects have contributed to the media debate, but not one has offered concrete solutions.

In the complete absence of a valid and feasible alternative, for the last six years the enormous ships have continued to enter the Giudecca Canal, passing in front of San Marco and returning to the old town. The technical times needed to arrive at a working solution lead us to believe that things will remain this way for a while to come.

It will take years. At the moment the proposals being discussed are only hypotheses, there is no real project to examine or evaluate; all we can do is speculate. The only certainty is the enormous damage to the ecosystem and to the hydrogeological stability of the lagoon, in addition to the latest figures on the air pollution produced by the large ships which indicate that Venice is the most polluted Italian port (and third most polluted in Europe).

We are asking the Large Ships Committee to evaluate and compare only those projects that exclude the passage of large ships through the lagoon, so that its protection and safety can be guaranteed by preventing the excavation of canals and construction of new terminals. In the meantime, in this transitory period, FAI also asks that the Committee does not limit itself to measures of dubious efficacy, such as the reduction in speed of the ships, but that it seeks to prevent the transit of vessels weighing over forty thousand tonnes in the Giudecca Canal with immediate effect.

The impact of this kind of tourism risks destroying the very destination that attracts so many visitors from around the world. Courage is needed to impose clear boundaries, seeing as how the tourism market has already demonstrated itself capable of adapting to changing environmental conditions with great flexibility in the past, and we must believe that it will be the same in this case.

A monumental Longobard complex, today part of an a