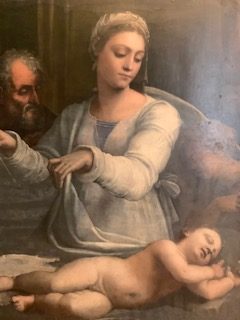 We can honestly say that our Neapolitan visit was as fascinating as the fascinating city of Naples itself, and great were also our FAI UK travellers; they were travellers and not tourists.

We enjoyed great hospitality from the ‘kings’ of Naples, the Pontecorvo and the Leonetti families; our chairman William Parente and his wife Alison were superb hosts in Capri where they have one of the most enviable villas, with an Italian garden, an orchard and a vineyard which produces a delicious wine.

Our hosts demonstrated what Neapolitan food can be like: mozzarella like one never even dreams of, melanzane ripiene, babà, torta Caprese, ecc ecc.

We entertained our wonderful group with a special concert of Neapolitan Baroque music, (D.Scarlatti, Provenzale, Starace and Pergolesi). The soprano, Olga Cafiero, was exceptional and Leopoldo Punziano a fine tenor; clavicembalo continuo and direzione by Angelo Trancone; all from the Antonio Florio School. It took place at Palazzo Positano. Dinner was Neapolitan and also exceptionally good. 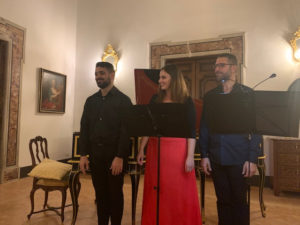 We admired the Anjou gothic and the great work of the Florentine schools in the amazing churches distributed around Spaccanapoli, stopping for shopping and pizza.

At Cuma we became aware of the antiquity and greatness of a city which was in effect two cities, Neapolis and Partenope. Cuma and Baia were the elegant sites for the Romans and it was here that Brutus and Cassius fled after Caesar’s assassination wondering what to do next. 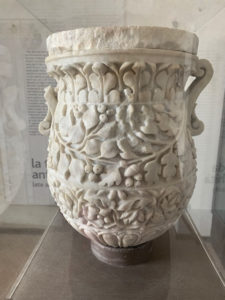 Needless to say, we visited the atrium where the Sibilla Cumana gave her verdicts – if you remember the Sistine Chapel, she is featured by Michelangelo as a very attractive Neapolitan woman.

No one can visit the Museums in Naples without feeling a sense of awe, Capodimonte and the Museo Archeologico are amongst the richest collections in the world, they include works by Sebastiano dal Piombo, Raffaello, Titian, ecc – besides mosaics and statues from the collezione Farnese.

Naturally we had to be selective and therefore missed several works of art but could overlook the huge Caravaggio at the Pio Monte della Misericordia. And, dulcis in fundo, the superb convent of San Giovanni in Carbonara conquered our group with its Gothic tombs: most of those who lie there, princes, lovers of queens etc died of poison.

I think that our voyagers were proud to represent FAI UK and contribute to it; and so they might. While in Naples, the Italian President was inaugurating il “Colle dell’Infinito”, on the other side of Italy; we all contributed to save the site where Leopardi wrote one of his greatest poems, a FAI gift to culture.

A monumental Longobard complex, today part of an a