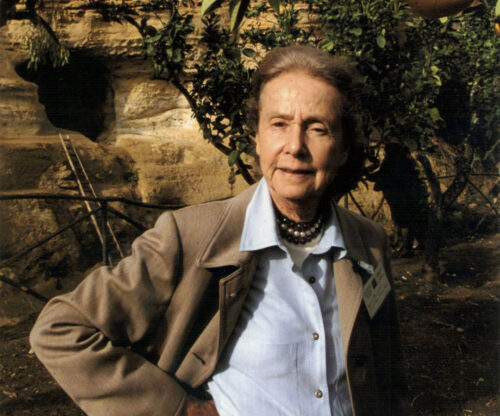 Some time ago: a memory of Giulia Maria Crespi by Gaia Servadio

Some time ago, in Sardinia where Giulia Maria had a superb chunk of the coast which she kept wild, a famous and very rich American lady, high heels and an expensive bag, came to see her.

Giulia Maria had just been working in the fields, preparing for the vendemmia. As usual she was wearing a T shirt and flat shoes; the American lady asked her “Do you know where I can find Countess Crespi?”

To her amazement, I pointed at Giulia Maria who, of course, was amused by this sort of thing but did not want to show it.
There was an element of innocence in Giulia Maria’s inner self and that’s how she was able to fight a difficult world that was basically dishonest and refused to see what was happening: Italy, its architecture, its culture, its Nature needed help.

And she gave it.

She invented FAI, Fondo Ambiente Italiano, in which at the start, nobody believed; but she had the power of her conviction, culture was an achievement, we had to keep it going, we have to believe in it. And we have to pay for it.
Giulia Maria Crespi who died on the night of the 19th of July, leaves this superb heritage because she conquered us all.