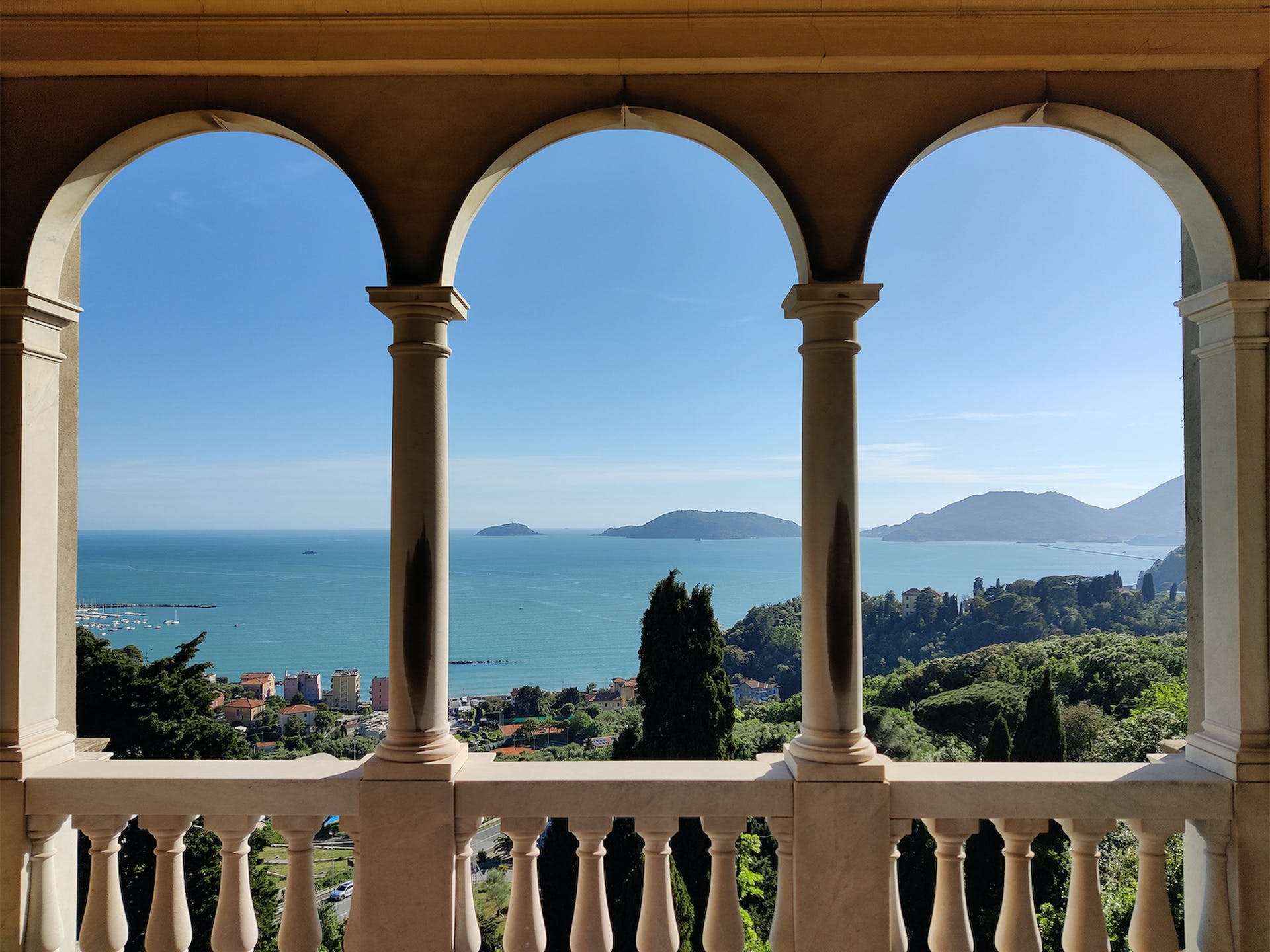 When I went to Lerici as a guest of Pupa Miniati at Villa Rezzola I was always struck by the absolute wonder of the view over the Golfo dei Poeti, by the warmth with which I was received in this large villa inhabited until the early 1900s by an English family – the Cochrane family – and then bought by Pupa’s mother who loved it intensely, as did her daughter, furnishing it with exquisite taste for the pleasure of living there together with friends with whom to share the very special pleasure of the place; I was fascinated by the large and complex English garden to which Pupa, a keen botanist, led me and – like any self-respecting “gardener” – an inexhaustible collector of new species of flowering plants and shrubs with which to make this piece of the world she had been blessed with ever more like Eden; my visit, during which we discussed the distant future (which arrived in a flash…) that would see this property become part of the FAI heritage so that it could be visited, enjoyed and experienced by as many people as possible, ended with a magnificent tea served on the spectacular terrace overlooking the gulf loved by Shelley and Byron: the Gulf of the Poets.

After Pupa’s passing at the beginning of this year, I returned to Villa Rezzola together with a few colleagues, in a certain sense to take possession of it and to decide on the first steps towards opening it to the public for the first time. Pupa’s absence was like the absence of the sun on a beautiful Spring day, the absence of her inimitable laugh like the absence of the nightingale’s song on a full moon evening…; I felt almost like a usurper walking without her on those carpets, under those long pergolas of wisteria that would soon bloom as always but no longer for her, along those elegant paths in the woods of holm oaks and cypresses among which the deep blue of the Ligurian sea peeps out from time to time. But that’s not all: instead of talking to Pupa about the Viburnum fragrans which in the Spring gives the garden the same scent that the Olea gives in the autumn (“But Pupa, do you think the one with the orange flower or the one with the ivory flower smells better?”, she laughed silently… “What do you think Marco? I say one day one and one day the other…” and again her laughter filled the silence…) instead of talking about flowers, I was saying, we had to scrutinise that paradise with our colleagues with the severe eyes of those who immediately have to reckon with the inevitable abandonment of a property no longer maintained with the necessary care (Pupa was approaching one hundred years old…), with the prosaic necessities of providing a ticket office, toilets for visitors, parking spaces for (we are sure) dozens and dozens of cars, securing collapsing boundary walls, carved stone balustrades that slide towards the sea, the inevitable bloody pruning of damaged plants, gutters to be replaced, electrical installations that are not up to standard, the roof that resists but not for long… Pupa also provided FAI with a generous dowry that will allow, after the restoration work, its perfect maintenance “forever and for all”.

A new challenge to support together

But now the hard phase of estimates, of restoration and enhancement projects, of the study of the management project begins for us: we will be frightened (as always happens) by the figures that the various offices will give us, we will work with the Fundraising offices, we will start the pilgrimages in search of partners to involve in the financing, we will open the building sites… Years of work await us, but the encouraging memory of Pupa, the light of the Ligurian sun and the scents of wisteria will give us the courage to face this new, challenging and exciting undertaking.

But most of all – believe me! – the continued support of all of you will be important to us! Proselytise! The Italy of wonders needs to be supported by an ever-growing and enthusiastic army!

In October 2020, upon the death of Countess Maria Adele (Pupa) Carnevale Miniati, FAI received as a legacy her home in Pugliola, a hamlet of Lerici on the Ligurian coast: Villa Rezzola. After the will was unsealed on 16 February, we immediately set about making an inventory of the furnishings. Around 1,500 pieces of furniture, paintings, prints, carpets, silverware, dinner services, objets d’art and everyday objects, some of which have very curious stories behind them (such as a spinning wheel, subsequently mounted as a lamp, given by Mahatma Gandhi to Pupa’s mother), were described, photographed and valued. Once the inventory work was completed, the investigations, preliminary studies and surveys of the general state of conservation of the architectural complex began (there are about thirty rooms in the house alone, spread over three levels), the structures and the furnishings. This work is fundamental for deepening our knowledge of the property and acquiring the information needed to plan the initial interventions and plan future restorations. While in the park we have already proceeded with the safety of the architectural components, the maintenance of hedges, trees, grass and flower parterres, for the opening to the public from 25 June 2021.