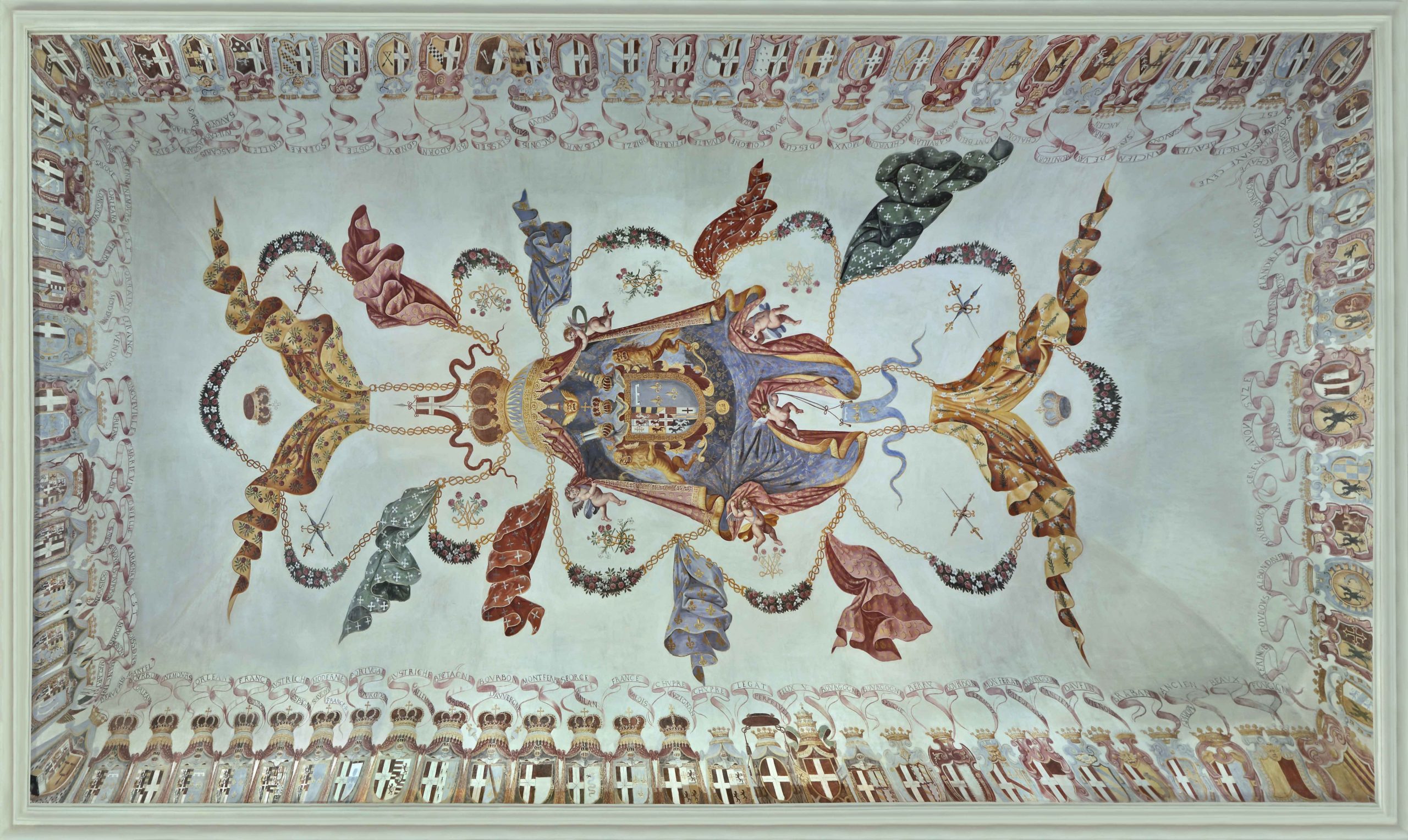 FAI inaugurated the Salone dei Savoia at Castello di Masino after three years of restoration works that have brought to light an astonishing cycle of frescoes from the late 17th century, perfectly preserved and hidden by coats of paint from a later installation.

The result of the restoration is impressive: until 2019, Salone dei Savoia was a 19th-century picture gallery with walls painted in simple white; there were glimpses of an underlying decoration, but such a discovery was unimaginable. After removing the paint from 480 square metres of surface, in fact, the Salone dei Savoia today reveals itself to be completely different in appearance to what it was at the end of the 17th century: a sumptuously frescoed reception hall. The frescoes include trompe l’oeil-painted architecture framing landscape views of 22 towns in Piedmont and Savoy, a frieze of 147 noble coats of arms, culminating in the symbol of the marriage of Victor Amadeus II and Anne of Orleans, niece of Louis XIV, and a 3-metre-high family tree on the fireplace. It is an iconographic programme that is unparalleled to date, which through the customary, but here particularly insistent, use of heraldry, celebrates the Savoy dynasty, to which the Valperga family, owners of the Castle for centuries – and in particular the Count of Masino Carlo Francesco Giuseppe (1655-1715) – was closely linked and loyal.

The Salone, monumental in its uncovered decoration and size – the largest in the castle – has been restored as it was, with armchairs on the walls and large gilded lanterns in the centre, and is now the fulcrum of the visit, as was the 17th-century ceremonial, when Carlo Francesco received ambassadors, members of foreign dynasties and dynasties and the Savoy themselves here, in Masino as the seat of a small court.

More than in the artistic quality, in fact, the value of these unpublished and unexpected frescoes lies in the small and great stories they tell and – some still to be discovered- which enrich the Castle’s wealth of knowledge on personalities, historical events, functions and decorations of the rooms, but above all open the way to further, inexhaustible and promising research.

Studies and investigations, whether in the archives or on the painted walls, are the foundation and nourishment of valorization according to FAI, and Castello di Masino well represents this approach: since 1988, when FAI purchased the property, still inhabited by the last descendant, Luigi Valperga, the Foundation has never stopped dedicating itself to the care of this heritage, investing a total of almost 16 million euros in maintenance, conservation and new restoration sites that are always, inevitably, “sites of knowledge”.

Finally, in order to tell the public about the newly restored Salone dei Savoia, and to invite them to discover the many stories, symbols and references that it contains, FAI has added a new space to the visitor’s itinerary dedicated to in-depth study in the former loggia overlooking the landscape adjacent to the Salone, with four touch-screen videos and a copy of the Theatrum Sabaudiae available to visitors.

The inauguration of the Salone dei Savoia took place on 29 April in the Ballroom of the Castello in the presence of Marco Magnifico, FAI President, Bruna Flecchia, Deputy Mayor of Caravino, Alberto Cirio, President of the Piedmont Region, Massimiliano Caldera, Soprintendenza Archeologia Belle Arti e Paesaggio per la Città Metropolitana di Torino and Daniela Bruno, FAI Deputy Director General for Cultural Affairs. The greetings and the illustration of the results of the restoration work were followed by a short round table discussion in which four ambassadors were present: Christian Masset, Ambassador of France to Italy; Alfonso Dastis, Ambassador of Spain to Italy; Jan Kickert, Ambassador of Austria to Italy; Michele Valensise, Ambassador, former Secretary General of the Farnesina.

FAI thus wishes to evoke the function of maximum representation that the Salone dei Savoia and the three adjacent rooms had at the end of the 17th century, conceived precisely to accommodate foreign diplomats and in fact traditionally known as the “Ambassadors’ Chambers” of Spain, Austria and France; but above all, taking its cue from the heraldic interlacing painted in the Salone dei Savoia, which links dynasties and dynasties from all over Europe through the symbols of matrimonial and political alliances, this seems to be the occasion for a reflection, more topical than ever today, on the meaning and value of European unity and the common identity on which it is historically founded.

The worksite in the Salone dei Savoia is part of the broader programme of restoration and enhancement work begun in 2019, dedicated to the pictorial decoration (2000 square metres of painted surfaces), mainly 17th-century, of the Castle’s most monumental rooms – Salone degli Stemmi, Sala del Biliardo, Sala dei Gobelins and Salone da Ballo – and made possible thanks to the fundamental contribution of the Deutsche Post Foundation.