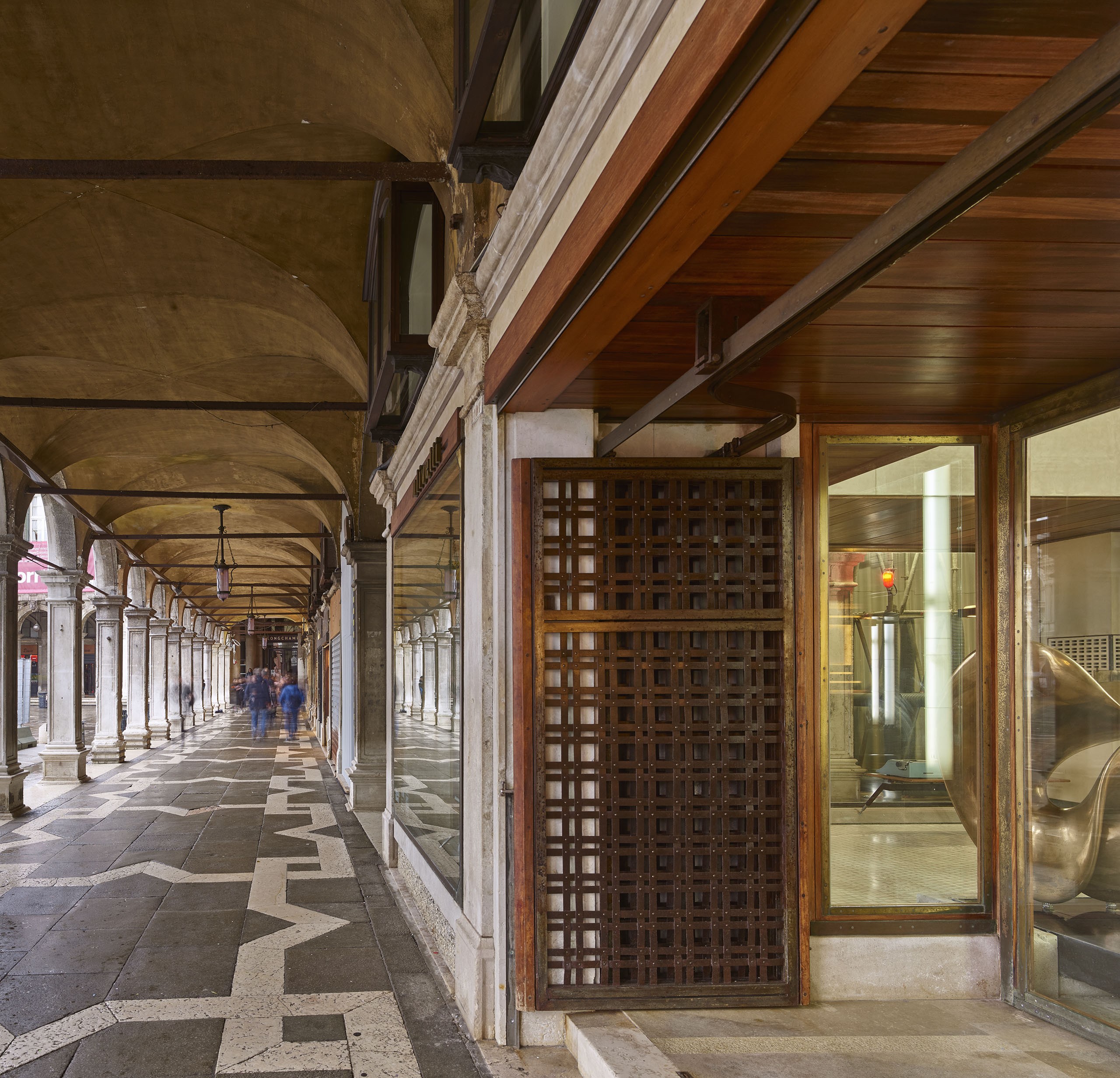 The restoration of “Cancello Scarpiano” at Negozio Olivetti in Venice

The precious entrance gate of the Negozio Olivetti in Piazza San Marco, designed like the entire interior by Carlo Scarpa, has recently been restored thanks to the intervention of the same craftsmen who originally made it: the historic Officina Fabbrile Zanon of Venice.

The gate protecting the large ground glass windows of the entrance to the Negozio Olivetti is a unique element that distinguishes and characterises its elevation on Piazza San Marco. Designed in every detail by Carlo Scarpa, the gate, 2.30 metres high and 2.60 centimetres wide, has recently been restored by the same craftsmen who originally made it, the historic Officina Fabbrile Zanon of Venice.

The gate consists of three sliding wings suspended between the wall and the wall of the entrance vestibule. Each leaf is a unique piece, which denotes Carlo Scarpa’s care and attention to detail: a metal frame encloses a grating – the so-called carabottino, usually used in boats – composed of interwoven slats locked by copper rivets, all finished with side slats in Afromosia wood, a very rare and precious essence, anchored with iron screws hidden under elegant ebony caps.

The casing of the doors allows the water to drain away when the high tide arrives: the lower parts of the gate, like those of the entire Shop, literally find themselves underwater on these occasions, now fortunately diminished by the commissioning of MOSE. Once dried, the saltiness of the water causes corrosion that requires continuous maintenance: in the more than sixty years of the Negozio’s life, work has been carried out on the frame several times, most recently during the overall restoration of the property for its opening to the public in 2011.

THE SAME CRAFTSMEN WHO WORKED WITH CARLO SCARPA

More than ten years after this last restoration, despite the installation of a bulkhead in the event of high water and constant scheduled maintenance, more substantial work had to be carried out. FAI involved artisans who still carry on their work with rigour and skill: brothers Paolo and Francesco Zanon, blacksmiths who have continued their father’s work for over sixty years in their workshop between the Ghetto and Sant’Alvise. Francesco met Carlo Scarpa at the age of 14 and continued the collaboration with the architect already started by his father, for the construction not only of parts of the Negozio Olivetti but also, among others, of Palazzo Querini Stampalia in Venice and the Brion Memorial in Altivole, in the province of Treviso; a collaboration that continued until the death of the Venetian master in 1978.

The Zanon brothers carry out craftsmanship that is now extremely rare and is today endangered by the lack of pupils willing to learn it and carry it on.

THE WORK ON THE GATE

The gates, once dismantled, remained in the workshop for two months. In full compliance with the Scarpiano project of the 1950s, the blacksmiths replaced the lower portions of the gate, those in greater contact with high water and unfortunately irrecoverable, with new solid drawn iron elements, of the identical section to the original, and two rows of the carabottino weave, irreparably damaged by rust.

The surfaces of the gate were then subjected to an accurate final intervention carried out by specialised restorers: the most complex work was the colour matching between the original part and the newly replaced lower part.

Once the wings were reassembled in the workshop, the gate was returned by boat to Piazza San Marco and reassembled by the craftsmen at the entrance to the Shop, with the same care and attention that they have always dedicated to their work.

FAI -Fondo per l’Ambiente Italiano was delighted to inaugurate at the Negozio Olivetti, FAI Property in Piazza San Marco in Venice, the exhibition “Lucio Fontana/Antony Gormley”, curated by Luca Massimo Barbero, a collateral event of the 59a Esposizione Internazionale d’Arte – La Biennale di Venezia, open to the public until November 27th.

The Negozio hosts a close and refined conversation between the works of the two artists: drawings by Lucio Fontana, created between 1946 and 1968, and works on paper and notebooks of drawings by Antony Gormley, and a selection of sculptures by both of them, mostly unpublished and never joined together in an exhibition.

In the dialogue between the complexity of the sign in the work of the founder of the Spatialist movement and the relationship between space and body in the work of one of the most acclaimed and articulate sculptor-researchers of our century, a third protagonist enters the picture: Carlo Scarpa’s architecture, which emphasises and enhances the shapes and colours of the works on display, carefully inserted in the space designed and marked by lines, light and materials, in a rigorous and harmonious composition, whose perfection makes the Negozio Olivetti a work of art in itself and an icon of the 20th century.

Architecture, after all, for Antony Gormley is the “most effective and powerful testing ground for sculpture”, to express his idea of the body, itself architecture, a sensitive container and an element of expansion in space

For Lucio Fontana too, architecture is the necessary element from which to start in order to reach, in a perceptive and above all conceptual way, a further dimension, which is not limited to the work object, but goes beyond mechanical lines and mechanical time to conquer, through the gesture of sculpting, a dimension of “eternity”.

As part of the programme of cultural activities that FAI carries out at Negozio Olivetti, geared towards enhancing the spirit of the place, which ranges from the architecture of Carlo Scarpa to the story of the Adriano Olivetti company, but which increasingly hosts reflections on the past, present and future of Venice and the Lagoon, which is very close to FAI’s heart, the exhibition is an extraordinary opportunity to appreciate, in addition to the works of the two artists, the exceptional potential of this place as an exhibition space where art and technology, man and machines, tradition and modernity have always come together.

At the wish of Antony Gormley and Fondazione Lucio Fontana and thanks to the contribution of Associazione Arte Continua and Galleria Continua, the exhibition is free.

The exhibition is accompanied by an illustrated catalogue, edited by Luca Massimo Barbero, published by Marsilio Editore, 2022.

On the occasion of the exhibition, FAI is organising special guided tours of Negozio Olivetti and the exhibition and educational workshops for families.